The Best Things I Ate in Israel 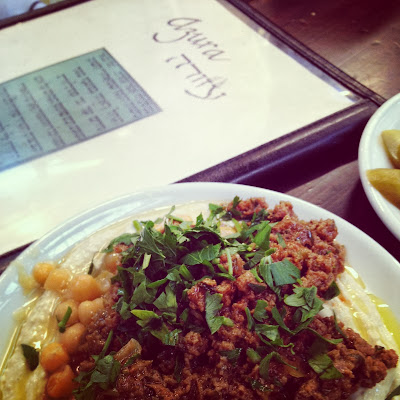 Just returned from another epic trip to the Holy Land. Been three years since I'd checked in and yes, things have changed. Jerusalem is still the chaotic-lovely-congested-quiet-filthy-picturesque bag of contrasts that I love. But it's definitely gotten a bit more posh in certain areas, like the revamped "Tachanah," or Old Train Station with its industrial-cool restaurants and artisanal food market. The once-seedy Mahane Yehuda produce market is now on its way to being a cosmopolitan nosh-nexus similar to Seattle's Pike Street Market and San Fran's Ferry Building. Now amidst the stalls hawking nuts, pickles and figs there are trendy pasta restaurants and even a fish and chips place. I tried Georgian food for the fist time and was impressed with the strong flavors and hints of Eastern spices and influences. And while this trip was by no means an exhaustive tour of all that is current and trending in Israeli cuisine (I was traveling with two toddlers, meaning, I drank about a gallon of wine every night and it was a miracle my iphone was not covered in hummus and phyllo grease by the end of the trip), I was able to taste some spectacular things.

Herewith, my culinary adventures in pictures.