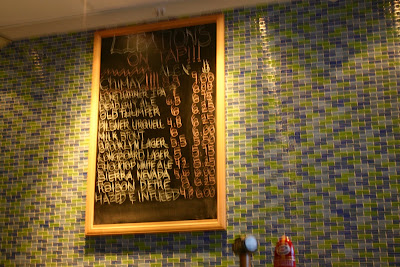 Congrats to Lou's on the (mostly) positive review in the Herald. The New Hotel’s poolside beer garden has just expanded their draft offerings to an impressive 12 taps including rare brews like Dogfish Head’s Raison D’Etre, Stone’s Double Bastard and Rogue’s Dead Guy Ale (apologies for the blurry pic, I blame it on that pint of Hazed and Infused I downed while scarfing some peppery fries). There are a few new menu items to soak up all the alchy like chorizo-stuffed squid and the surprisingly delicious Callos de Sevilla, minced cow intestines seasoned with sage and mushrooms. Also, Chef Lou was talking of adding more offally goodness to the menu like cow brains and tongue. Dude is fearless.