Girls Night In @ agua Spa at the Delano 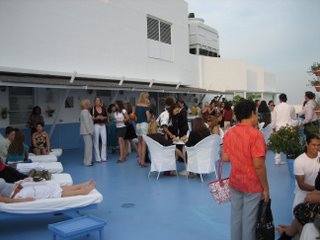 The agua spa event at the Delano Thursday night can be described as many things, but comfortable really captures it. Located on the Delano's scenic rooftop patio, "Girls Night In," heavily promoted by Tara, Ink was a rousing success. Luckily I arrived early enough, but I heard battle stories of women vying for spots on the packed elevators, though the party never seemed overly crowded. 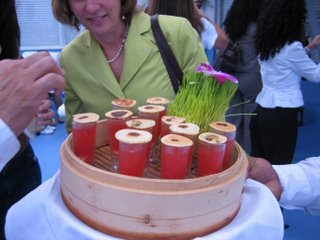 Without men around these women were free to eat, chat, receive hand massages, and revel in the evening glow. The passed appetizers were dainty and imaginative with plenty of options for those who don't dabble in shellfish and pork, the usual staples of Miami nightlife nibblets. A popular favorite was the "shots" of watermelon juice (above) with little cubes of feta cheese on the bottom of the cup. They were topped with little pancake discs - very fun. That watermelon-feta combo is super popular in Israel in the summer, it's at every event there. 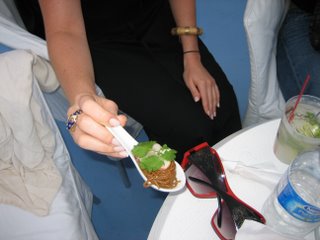 The curry noodles with lobster and cilantro(above) were big hits as well. Of course the food platters were also attacked by the melange of female hoi polloi who were sucking down the weak Bacardi mojitos and putting their names on an endless list for free mini-facials. 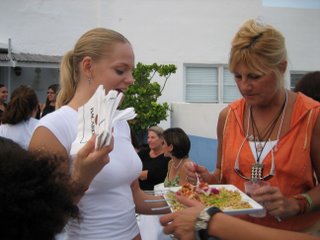 This woman really reminded me of an aunt in Israel, "Doda Shoshana." Let's just say, Doda Shoshi is that particular brand of Israeli that never met a sparkly shirt she wouldn't wear and sports a look that combines a lifetime of sun-worship with a love for over-peroxided hair. Man, Shoshi would have rocked the Delano, straight, up. 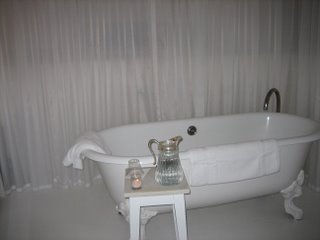 The spa itself is nice enough - not the sprawling behemoths you'd find at other hotels like the Setai or Mandarin Oriental. Each treatment room is separated with the Delano's signature white gauze curtains and there are hydrotherapy and bath treatment rooms. It's cozy and romantic, with a staff that seemed incredibly accommodating and pleasant.
But if you were content not to subject yourself to the waiting list, or not in the mood to be massaged in public, then the evening lent itself a certain relaxed laziness. With the sun setting over the Miami skyline and the efficient Delano staff assiduously clearing the tables and providing ample food and drink, the lovely ladies of Miami were able to bask in the glow of female camaraderie, just as long as the spa didn't run out of gift bags. Then you best take cover, Tara, Ink.