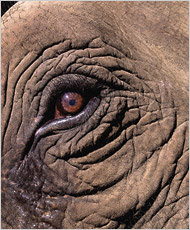 An upsetting story about an elephant in India that killed 27 people, though it's not clear whether they shot the right one. What's interesting is the article says how the elephant's family will now take revenge on the village - these beasts are way more complicated than society ever gives them credit for. The NYTimes Magazine had a fascinating cover story a few months ago about elephants going mad after years of herds being decimated through poaching and deforestation. Elephants are apparently highly socialized creatures with sophisticated rituals and communication methods. Here's an excerpt:

Elephants, when left to their own devices, are profoundly social creatures. A herd of them is, in essence, one incomprehensibly massive elephant: a somewhat loosely bound and yet intricately interconnected, tensile organism. Young elephants are raised within an extended, multitiered network of doting female caregivers that includes the birth mother, grandmothers, aunts and friends. These relations are maintained over a life span as long as 70 years. Studies of established herds have shown that young elephants stay within 15 feet of their mothers for nearly all of their first eight years of life, after which young females are socialized into the matriarchal network, while young males go off for a time into an all-male social group before coming back into the fold as mature adults.

When an elephant dies, its family members engage in intense mourning and burial rituals, conducting weeklong vigils over the body, carefully covering it with earth and brush, revisiting the bones for years afterward, caressing the bones with their trunks, often taking turns rubbing their trunks along the teeth of a skull’s lower jaw, the way living elephants do in greeting. If harm comes to a member of an elephant group, all the other elephants are aware of it. This sense of cohesion is further enforced by the elaborate communication system that elephants use. In close proximity they employ a range of vocalizations, from low-frequency rumbles to higher-pitched screams and trumpets, along with a variety of visual signals, from the waving of their trunks to subtle anglings of the head, body, feet and tail. When communicating over long distances — in order to pass along, for example, news about imminent threats, a sudden change of plans or, of the utmost importance to elephants, the death of a community member — they use patterns of subsonic vibrations that are felt as far as several miles away by exquisitely tuned sensors in the padding of their feet.