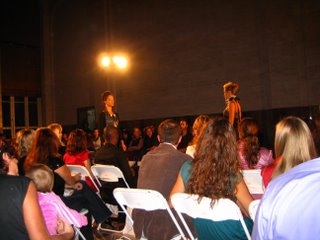 Last night's Krelwear show was a classy affair, or about as classy as Miami gets after the J.Lo and Heatherette madness of Funkshion Fashion shows. The crowd of rag-tag Miami fashionistas and their skinny male friends made nice before the show started by drinking Peroni beer and Finlandia cocktails in the cavernous Dupont auditorium. Indeed, the Dupont building proved a magnificent setting for Karelle Levy’s deconstructed "toobular" knits. The pieces were literally seamless with a body hugging quality that was both futuristic and feminine. The soundtrack to the show was a booming montage of French hits from the 60's (who doesn't enjoy a little Yves Montand and Edith Piaf every now and again?) and a slowed-down version of Fiona Apple's remake of John Lenon's "Across the Universe." Several outfits received a smattering of applause including a halter-fishnet dress and a suspendered frock that swallowed the model who listlessly walked it down the runway. All in all, a nice indication of where fashion is headed.