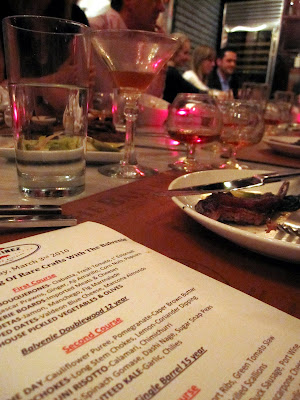 Last week I was lucky enough to attend a scotch pairing dinner at Sra. Martinez courtesy of the Balvenie folks. It was in honor of their unveiling of the Balvenie Medeira Cask 17 year, a velvety smooth spirit that was almost too easy to drink (yes, I had a slight hangover the next day - lesson learned. Scotch does not equal wine.)
Four courses, 20 dishes, four snifters of scotch later I discovered that I have expensive taste in Scotch (the Portwood 21-year was my favorite at about $160/bottle) and that Spanish food pairs surprisingly well with the dark stuff, redolent with notes of cloves, tobacco, raisins and oak. An added bonus was that I got to taste almost the entire menu at Sra. Martinez, a real treat since I haven't been to the restaurant in a while. Always good to see what Michelle Bernstein is experimenting with in the kitchen. Seems like she's taken a generalized Latin approach to the tapas and isn't doing strictly Spanish food. For the most part it works, and everyone at the dinner (including wizened NY liquor ambassadors) seemed impressed with the parade of plates.

Highlights include:
Shrimp tiradito with ginger, aji amarillo, corn nuts and popcorn - definitely more of a Peruvian dish with the corn nuts and a superb aji sauce.
Uni risotto with chimichurri - lovely. Though the calamari topping doesn't really add much - bland in taste and texture.
Butifarra - gigante white beans with foie gras-duck sausage and port wine - hearty, rustic, satisafying. Food for a winter's night in a French castle.
Crispy Artichokes - as good as the first night they opened. This dish is a winner - salty, crunchy, nutty. I could eat the lemon-coriander dipping sauce with a spoon.
Banana fig torrejas - a nice rendition with rum-sauteed bananas and figs and butter pecan ice cream
Less impressive:
Rabo Encendido - oxtail with mascarpone cheese. I like those two things separately, but put them together and the dish is way too rich.
Cauliflower a la plancha with raisins and marcona almonds - the raisins and almonds didn't do much for the cauli which also seemed a bit undercooked. Much prefer the cauliflower over at Sugarcane topped with bagna cauda, the anchovy butter really perking up the bland vegetable.

Yeah, I learned the hard way. It's funny because I had so much to eat and so little to sip, but it was strong stuff.

Yeah, try the George T. Stagg uncut/unfiltered bourbon at MGFD as a after dinner sipper sometime. That one glass will rock you harder than a night of scotch drinking!