I love interactive cooking demonstrations. It’s a great way to get in touch with your food. But making sushi can be an intimidating prospect for the average gourmand. It is one of those beguiling foods that is incredibly easy to consume and ridiculously difficult to make. Or so I thought. Turns out the process, while labor intensive, is hardly more complicated than making a sandwich. The difference is the meticulousness with which one must approach the process. Too much crabstick here, too little rice there and you’ve got an uneven sorry excuse for a roll. So it was with anticipation tinged with a small dose of trepidation that I approached Doraku's Art of Sushi rolling class last week. 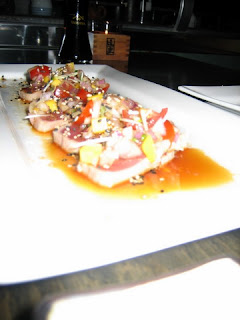 The $40 class fee includes a great 4-course Japanese meal featuring the restaurant’s Pan-Asian cuisine. Dinner begins with seared tuna (above) topped with tropical Asian salsa, a tangy and refreshing mix of mango, red onions and black sesame seeds. Next was salmon carpaccio bathed in creamy ginger sauce, and for the third course we opted for seared tofu in a bracing ponzu marinade, the tofu skin expertly flash fried encasing the creamy center. Throughout the courses Doraku executive chef Hiro Terada visited our table and distributed thoughtfully prepared photocopied packets on the history of sushi along with recipes and instruction on how to prepare the sushi at home. After the third course, I and my fellow sushi apprentices gathered around the makeshift sushi demonstration area to glean from chef Terada nuggets of raw fish wisdom. 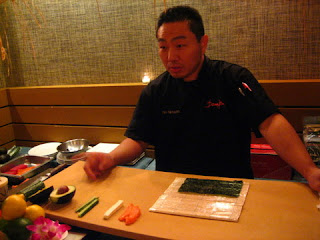 A patient teacher, the chef went about making a variety of rolls including basic California, spicy tuna and philly rolls (which by the way, do not really exist in Japan, something the chef admitted sheepishly). We all observed the chef in action, exclaiming observations to be remembered when it was our time on the board (“Always dip your hands in water when handling the rice.” “That Japanese knife is awesome!” etc.) Obviously some of us were enjoying our saketinis during the process as well.
Then the chef started getting fancy creating rainbow rolls, a dragon roll (below) using two tempura-fried shrimp and elegantly sliced avocado on top. He elicited gasps from us when he expertly cored and ribboned a cucumber in order to create the “skin” for a seaweed-free roll consisting of crabstick and avocado. He also used an edamame paper for a vegetable roll, something I hadn't seen before, probably because I never order vegetable rolls. 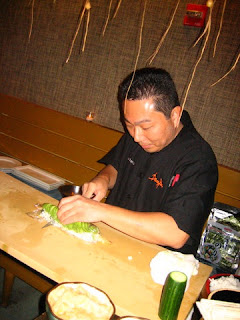 Then it was our turn to make teach proud. Every person gets to make their own roll with chef helping along. The atmosphere is generally jovial and friendly throughout the whole process. The results were mixed of course, but pretty much everyone did a great job and had a good time doing it. After the rolling was done, it was a veritable sushi feast with white platters of all of the chef’s and student’s rolls covering the tables. After dinner Chef presented us with a fantastic party favor - a Doraku tin lunchbox filled with the essentails for creating the sushi party at home - a bamboo rolling mat, a pound of sushi rice, rice vinegar, soy sauce and chopsticks. The class is a great date idea and a good deal because you get to learn a new skill, eat a ton of sushi and possibly bond with new friends over the mysteries of sticky rice. 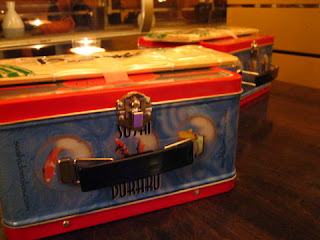