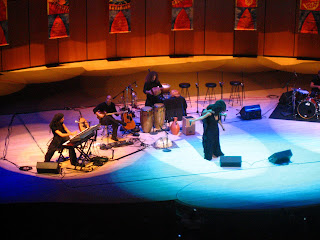 Idan Raichel's concert at the Carnival Center last week was a revelation. His music blends the deep and far-reaching roots of Judaism and the myriad of cultures and sounds that now populate Israel's streets. Rather than taking center stage as the leader, Raichel positions himself on the periphery of the semi-circle, transforming the performance into a collaborative effort, with each musician getting their due throughout the show. His roster of performers reads like an international line-up of Jewish communities: Persian-Israeli singer Lital Gabai, Ethiopian singer Wadergass Vese and Cabra Casay (she via refugee camps in Sudan), Urguayan percussionist Rony Irwyn (who gave an amazing encore performance playing water - the audience was spellbound and the acoustics at the Knight Concert Hall were incredible for a performance that delicate), Israelis Gilad Shmueli on drums, Golan Zuskovitch on bass and Yaacov Segal who played the tar, oud and guitar.
Raichel begain making music in a small studio in his parent's basement in Kfar Saba. Musician friends would stop by and they would work out an eclectic style that encompasses chanting, sultry vocals and rhythmic arrangements. The three-song encore performance indicated this fluid process when all the musicians gathered around the percussionist and worked out a thumping beat with the Persian and Ethiopian vocalists providing gorgeous accompaniment. And though the concert at the Carnival Center was a refined affair (I sensed the majority Israeli crowd really wanted to get up and dance and clap in the aisles but felt a bit constrained by the setting), if you closed your eyes you could imagine the funky musicians hunkering down in that Israeli basement, mixing beats and melodies from Yemen, Africa and all other corners of the world.