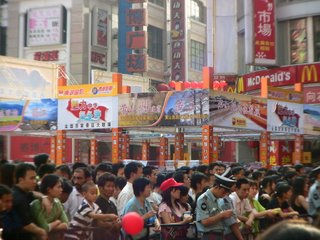 We have reached the mainland and here are some first impressions of China:

Very congested. Guangzhou is super developed with skyscrapers, factories, crisscrossing multi-layered highways and large hotels. Everything here is built for volume – restaurants can seat 1,000, packed buses clog the traffic choked highways, and grocery stores comprise multiple floors. Thus far, I have not had very pleasant experiences with the locals. It feels like someone is always trying to scam you.

Example: We sit down to dinner at a fairly modern trendy Chinese restaurant in a mall. The offer us tea, we accept without bothering to ask for the price of the tea. I figured we'd pay for the tea since it's not customarily a free part of the meal like it is in Chinese restaurants in America. Then we get the bill and the tea (which wasn't such amazing tea anyway) costs twice the amount of our most expensive entree. Twice the amount? Why would they assume we wanted their best tea? But it's just another example of the deception that goes on here. I understand that when you travel and you don't know the language you get ripped off, but it just keeps happening and it's really starting to color this experience. 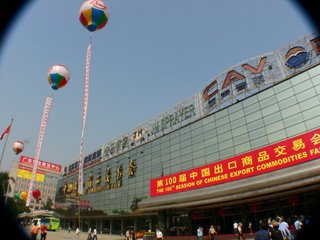 The Pazhou Export Fair complex is the largest fair complex in Asia and second largest in the world. The grounds of the complex spans 560,000 square meters (that's roughly 5.6 million square feet) with 177,000 companies exhibiting their wares. That's a whole lotta stuff. And that is exactly what this fair is filled with: stuff. And things. Lots of stuff and things. Everything you can think of is manufactured in China. And a lot of it is really crappy. It may be a cliche, but it's true. China is responsible for all that crap you see at dollar stores, all the trinkets, ceramic Santas, chotchkes, plastic congealed beer figurines, fake flowers, framed neon signs, crap, crap crap. Its simultaneously fascinating and depressing. Because just as many times I passed a booth filled with something useless, like say, strapless flip-flops (you foot is held on by industrial-strength adhesive), there were just as many buyers lined up to make orders for their stores. They make it because we buy it. It's a cycle of crap. 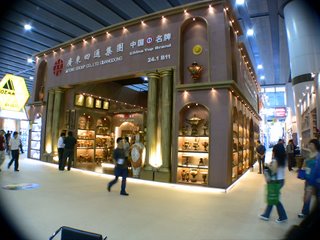