Listen up Miami food people. I've seen the gastronomic light, and it's in the shape of a charming restaurant called Indomania on 26th street in Miami Beach. If I were prone to dramatic statements I would tell you to drop what you are doing and make a reservation at the restaurant right now because it will be one of the most enjoyable dining experiences you'll have in this city. From the batik-covered tables to the cozy atmosphere to the gentle hum of conversation generated by the packed tables on a Sunday night it was clear that we had discovered something special. It reminded me of dining in New York, at a small spot with close-set tables. It also felt like a true neighborhood restaurant. That everyone there was in the know; they were all in on this culinary secret. The restaurant is owned by a retired Dutch couple, Pieter and Ineke Both. She's the chef, he's the host and they're both really good at what they do. 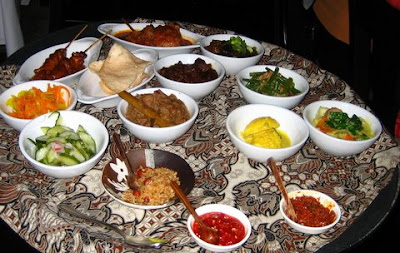 We dined on the “rijstaffel Sumatra,” a repast filled with a succession of small plates (about a dozen) varieties of Dutch-Indonesian traditional eats. Aromas of cumin in coconut sauce, of meat simmered in a mixture of ground tamarind mixed with cinnamon, lime leaves and lemongrass, of green beans sauteed in chilis and crushed macadamia nuts, of eggplants cooked with cloves. Of stews made with galanka root, shallots, garlic and ginger. Everything tasted different, with its own bouquet of herbs, fire and spice. Influences from Indian, Chinese and North African cooking were apparent but it was only as a reference point from which to build more complex tastes. Each dish maintained its own identity it all worked together. There was home made sambal olek for adding extra fire. There was a toasted shredded coconut for added texture. There was ginger-flecked rice to clear the palate. It was fragrant, refreshing and filling. It was a massive amount of food and at $26 per person, reasonably priced. 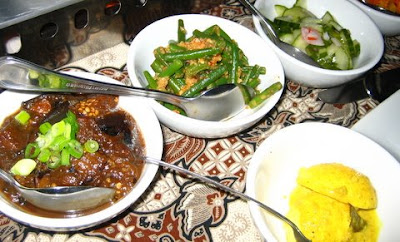 With the golden late-day sun pouring through the window and a chilled bottle of Estancia Divina Albarino ($28) to wash it all down the experience was downright romantic.

I'm excited to check this out. The food sounds really authentic.

It is. The owners were telling me that they get a lot of Indonesian employees who work at the Setai because the cooking is so traditional.

I've been there and totally agree.

I'm glad to hear they're doing well, I went shortly after it first opened and loved it - the food, the service, the ambiance...

My father is from Indonesia and he says it's the best! Both the host and the cook are great. Love to go there and our children as well! Juliette

When my friend asked me to try Indonesian food I was hesitant but when I tasted it, I may say it's really fantastic! I will surely go there and eat!

Love Indomania for same reasons, Sara. Chef Ineke got the flavors down esp. Beef Rendang. We need more genuine restaurants like this in Miami!

When I look on the food pix, it seems like a Filipino dishes. That's how indeed Filipinos cook their dish.

In Miami, there are lot of foods you can discover, I love the sushi that Pubbelly's is offering, really tasty and they offer other Asian culinary dishes.